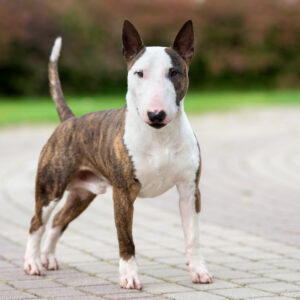 The Bull Terrier was once used as a fighter, but it is much gentler in modern times and fond of people. Although originally bred to be a fighter, it wouldn’t be a great guard dog because of its friendly nature. This spirited and fearless but fun-loving breed is active and will become attached to their owners but is not recommended with other non-canine pets such as rabbits, hamsters, and guinea pigs.

This breed exhibits the determination and courage of the Bulldog but is also a member of the Terrier group. Therefore, the Bull Terrier can have an independent spirit with a higher commitment to having fun or playing games than to working. Using positive reinforcement with food and toys is a great place to start when training a Bull Terrier. They can excel at a variety of dog sports such as agility, weight pull, and carting. They have also been used in roles such as bomb detection, search-and-rescue, service, and for therapy dogs.

Due to their independent (sometimes stubborn) spirit, owners need to display strong and consistent leadership. If not, meek owners may find the Bull Terrier to become protective, willful, or possessive, and because of their muscular build, harder to control. Socialize them beginning at a young age, otherwise they can become aggressive with other dogs. They should have firm but positive training and plenty of exercise.

Bull Terriers like to be active and will fit in with active families where they can receive a sufficient amount of supervision and company. They won’t do well in living conditions where they are left alone for long periods of time. The Bull Terrier is friendly with both adults and children but may become too energetic (especially for small children) if not given enough mental and physical exercise.

Grooming the Bull Terrier is easy. It is a naturally clean breed with little odor and is an average shedder. A bath when necessary with a mild shampoo is sufficient. Brush their short, sleek coat with a natural bristle brush or rubber mitt once a week will also suffice.

The pastime of bull-baiting was popular in Britain from the 13th century to the 1830s when it, along with other blood sports, was outlawed. However, practitioners of these blood sports simply went underground to escape the law. Bull-baiting was too visible an activity to continue illegally, so the blood sport of preference became dogfighting in pits in indoor cellars of taverns instead.

Bulldogs were too plodding to provide much entertainment in these events, so people began the process of crossbreeding Bulldogs with Terrier in order to try and produce fighters with the muscular power of a Bulldog and the fearless spirit of Terriers.

The law eventually caught up with pit fighting and it was also banned in Britain. The suddenly unemployed Bull Terrier breed became popular among young gentlemen of the mid-1800s, and so breeders began on refining the breed’s looks and sweetening its temperament in order in order for it to better play the role of an upper-crust companion dog. Some famous Bull Terriers include General George Patton’s dog Willy, Rufus the 2006 Westminster winner, and Bullseye the Target mascot.

Check out the Bull Terrier puppies we currently have in our stores. If there are none, please contact us and we’ll be in touch.