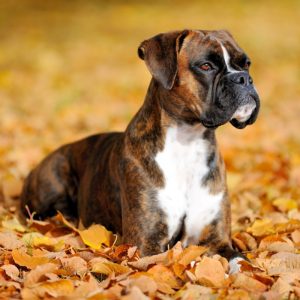 The Boxer has a compact and powerful body. Their head is in proportion with the body, and their muzzle is short with an underbite. A Boxer’s ears are set high and either cropped or kept natural. Their tail is set high and typically docked.

The Boxer’s coat is short, smooth, and comes in multiple colors including fawn, tan, brindle, mahogany, and black and often with white markings. Boxers also come in a white coat but some clubs will not allow them to be registered and white Boxers are prone to deafness. It has been said the name Boxer comes from the way the dogs use their front paws for just about everything.

If you watch a Boxer’s normal behavior you’ll notice it tends to paw at its food bowls, toys and even its owner in a very playful way. It’s normal for a Boxer to jump up and use its front paws as if it’s boxing. Discover more about our Boxer puppies for sale below and see why they are one of the most popular breeds in the U.S!

Boxers are happy, playful, curious, and energetic. They are very intelligent, eager, quick to learn and known to be a good breed for competitive obedience. Boxers bond closely with their family and they’re loyal and affectionate; in fact, they are known to get along well with children.

A properly socialized Boxer will get along with dogs and other household pets, such as cats, but small animals such as rodents or birds may be too tempting. Being energetic and playful, the Boxer can become boisterous and jump up on people without proper training and leadership.

Boxers need to go on a daily walk and get daily mental and physical exercise. Without it, they can become stressed out.

As for living arrangements, they can be fine in an apartment if sufficiently exercised even though they are active indoors, but Boxers really do best with an average-sized yard. They are also temperature sensitive, getting easily overheated and chilling very quickly.

Potential owners should know that boxer puppies require human leadership and should be taught not to be boisterous or jump up on people.

The Boxer was developed in Germany in the 19th century and its ancestors were two German mastiff-type dogs. They were later bred with the powerful ancestors of the Mastiff and Bulldog. Boxers were first used for dogfighting, bull-baiting, cart pulling, as cattle dogs, to round up livestock and to catch and pin wild boar and bison until hunters could arrive.

Breeders are breeding two types of Boxers, the German, and the American Boxer. German Boxers have bigger heads and are generally more muscular than American Boxers.

Check out the Boxer puppies for sale we currently have in our stores. If there are none here, please contact us and we’ll be in touch.