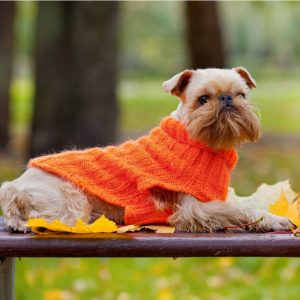 The Brussels Griffon is a sturdy toy dog. Its head is round and large with a domed forehead. Its muzzle is very short, with a pushed back appearance and an overbite. It has a long, wiry coat with fringe around the face, often leading people to remark how much its appearance looks like the Ewok character from Star Wars. The Brussels Griffon’s colors include reddish-brown, black, and tan. Discover more about our Brussels Griffon puppies for sale below!

The Brussels Griffon is an intelligent, affectionate, lively, and curious breed. These personality traits make it a good companion dog since they love everyone, and it can make them good with other dogs and cats. The Brussels Griffon should not live outside in a kennel, and if you feed it table scraps, it may become greedy or a picky eater. The breed may be difficult to housebreak, and without enough physical and mental exercise will become stressed, moody, and sensitive. The Brussels Griffon can also have a high tendency to bark.

The Brussels Griffon has two types of coats: smooth and rough. The smooth-coated Griffon usually only needs weekly brushing, daily brushing during shedding season, along with the occasional bath to help remove dirt and loose hair. Rough-coated Griffons do not shed and many have their hair clipped short. As with all breeds, the nails should be trimmed regularly.

Check out the Brussels Griffon puppies for sale we currently have in our stores. If there are none here, please contact us and we’ll be in touch.