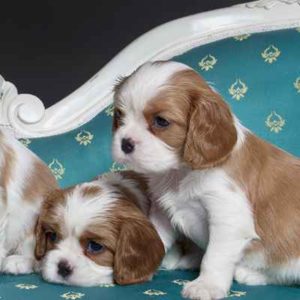 The Cavalier has the nicknamed “The Comforter Spaniel” because of their temperament and disposition. The Cavalier King Charles Spaniel is a devoted and affectionate lapdog that thrives on human contact and loves being part of a family. A sweet and gentle expression is typical of the breed. Since the Cavalier King Charles Spaniel thrives in a family environment they are great with children and other pets. As a result, this is not a breed that appreciates being left alone for long periods of time and can suffer from separation anxiety if ignored. The breed is very affectionate, happy, playful and eager to please its owners and they adapt well to most environments.

The Cavalier King Charles Spaniel breed is small, loving, and playful. They’re typically happy, trusting, and easygoing; friendly to everyone they meet. As a result, the Cavalier has the nickname “The Comforter Spaniel” because of their temperament and disposition. However, their temperament can range from sweet and placid to hard-charging and even stubborn, but in general, are smart and learn quickly. They respond well to positive reinforcement techniques, but harsh words will cause them to stop trying or even hide. As with many breeds, a Cavalier should usually not be shy or aggressive. The Cavalier King Charles Spaniel lives to be with their people and generally loves kids and does well with other pets. Due to their small size, monitor them around small children who may exert too much force when petting or playing with the dog.

Train your dog from a young age as any breed, no matter how sweet or gentle, can develop unpleasant levels of barking, digging, and other negative behaviors when bored, untrained, or unsupervised.

The Cavalier King Charles Spaniel is good with apartment life. They are moderately active indoors and a small yard is sufficient for play time as well as daily walks.

The Cavalier is relatively easy to groom and is an average shedder. Its medium-length, silky coat is not heavy enough that it requires hours of brushing, and it sheds dirt easily. However, brush the long silky hair of its ears, tail, stomach, and legs (known as feathering) two or three times a week to prevent matting or tangling; checking behind the ears and where the leg meets the body as that is where they commonly form. The Cavalier should only need a bath every 2-4 weeks. The only other grooming needed is regular ear cleaning, tooth brushing, and nail trimming.

During the 1920s Roswell Eldridge, an American, offered a monetary prize during a Cruft’s Dog Show in London to any person showing a King Charles Spaniel with a long nose because he was looking for Spaniels similar to those in appearance prior to the Pug was bred in. Ann’s Son, a dog owned by a Miss Mostyn Walker, won the prize but Eldridge had died a month before the show opened and was not there to present the award. However, his idea lived on in America and the Cavalier King Charles Spaniel breed of today is due to the American breeders of the late 1920s. During the 1940s the King Charles Spaniel breed was classified as a separate breed and was given the prefix Cavalier to differentiate it from its predecessors.

Check out the Cavalier King Charles Spaniel puppies for sale we currently have in our stores. If there are none here, please contact us and we’ll be in touch.