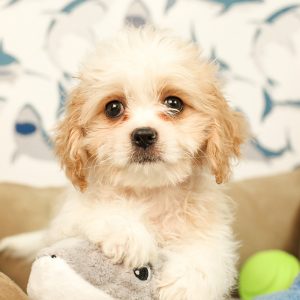 The Cava-Tzu is not a purebred dog, but a cross between the Cavalier King Charles Spaniel and the Shih Tzu. With mixed breeds, you can get any combination of any of the characteristics found in either breed, but Cava-Tzus tend to look a bit more like the latter, being regarded as one of the oldest breeds in the world. A Shih Tzu, meaning little lion dog, is a toy breed dating back to ancient Tibet and China. Despite the name, the breed was never fierce and always regarded as a companion and lap dog. They are intelligent and playful dogs who make good family pets and are good with children and other pets. They are easy dogs to train and don’t need an enormous amount of exercise to keep fit and healthy. Discover more about our Cava-Tzu puppies for sale below!

Cava-Tzu puppies can be a variety of colors including black, brown, white, tan, ruby, or a combination of two or three of these colors. Their coats are fine, medium, silky and thick, needing a fair bit of grooming to keep looking neat. They are small dogs with males and females weighing up to 16 pounds and are between 9 and 18 inches in height.

They have small round faces, oval-shaped dark eyes which usually have an alert expression, ears that hang down and a tail that curls back. Your pet will take on some of the characteristics of the parent breeds. The Shih Tzu, for instance, has a heavy underbite, while the Cavalier King Charles Spaniel has long, feathered ears and sometimes has to feather on their chest, legs, and feet.

Cava-Tzu puppies need a moderate amount of grooming and will need their coats brushed around twice a week. Depending on the coat length, they may need to be trimmed every so often, especially the hair around the ears. They do shed a moderate amount but the breed doesn’t need to be bathed often, only when necessary and always with dog shampoo so it doesn’t irritate the skin.

The Cava-Tzu is not regarded as a hypoallergenic breed. Brush your dog’s teeth daily if they allow it. It helps to start young, so it becomes a habit. They are prone to dental problems so good dental hygiene is vital. Clean the ears with a moist ball of cotton weekly while checking the nails to see if they need clipping should be done regularly.

The Cava-Tzu is a very affectionate and loyal dog who loves nothing more than spending time with their family members. They get along very well with children and other dogs but are known to jump up when excited so smaller children may need to be monitored when around them. The Cava-Tzu is also comfortable with strangers and enjoys being around most people. They don’t need a lot of exercises but respond well to ball games and love going for walks but are happy to have a good nap afterward.

This breed will adapt well to living in an apartment and are suitable pets for older people or those who need to go out to work during the day. They don’t bark excessively and are easy to train, responding best to rewards and positive reinforcement. They are also happy to be carried around or cuddled on a lap.

A Cava-Tzu doesn’t need a lot of exercises and will be happy to play games inside an apartment or in a fenced yard. Short walks to the beach or a dog park will be enjoyed but they do not need long walks. They tolerate the cold more than the heat so don’t walk them when it is very hot outside.

The breed is prone to picking up weight, so even though they are happy to be carried around, exercise shouldn’t be neglected. They are intelligent dogs so they will enjoy training and obedience classes. The breed is inclined to jump up when excited so training will help with that. The Cavalier King Charles Spaniel needs more exercise than a Shih Tzu so it depends on which breed your pet takes after more.

Shih Tzus are also known as the Chrysanthemum Dog and were prized by Chinese royals. They were bred in England in 1930 and the Shih Tzu Club of England was formed in 1935. During World War II American soldiers brought some Shih Tzu dogs home with them and in 1969 the breed was recognized in the Stud Book of the American Kennel Club.

They are very popular lap dogs and regarded as loving companions. The Cavalier King Charles Spaniel was named after King Charles I of Britain who ruled in the 1600s and was always seen about the kingdom with his treasured dogs by his side.

Queen Victoria also owned the breed but she sought to keep a variation in her kennels; they had a skull that was domed and were smaller with shorter, flatter faces. The Japanese Chin and the Pug were bred with her spaniels to produce the change. In the early 1900s, the effort was made to recreate the original small spaniel of the King Charles era. \

A dog named Ann’s Son became the breed standard for the Cavalier King Charles Spaniel. The breed was officially registered in the Kennel Club of England in 1944 and they were added to the American Kennel Club roster in 1996.

Check out the Cava-Tzu puppies for sale we currently have in our stores. If there are none here, please contact us and we’ll be in touch.