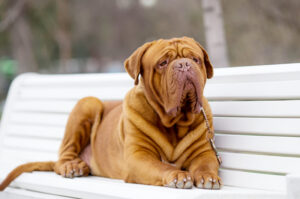 The Dogue de Bordeaux also called the French Mastiff and sometimes called the Bordeaux Bulldog, is a relatively short, stocky mastiff. The Dogue de Bordeaux is a powerful, muscular and brave dog and because of this, the breed is not suitable for inexperienced dog owners. The wrinkled head is massive, heavy and broad with proportionate body features. This is an ancient French mastiff-type breed whose puppies require early socialization and training but make sweet, calm and devoted family members despite their often imposing and intimidating size and appearance. Coat colors include various shades of fawn to mahogany with a darker red or black mask around and under the nose including the lips and eye rims. There are sometimes white markings on the chest and tips of the toes. Discover more about our Dogue De Bordeaux puppies for sale below.

Calm temperament, extremely loyal, patient, devoted to family and gentle with children despite its size. A fearless breed, so they can be confrontational with strangers, but they make a vigilant guardian if you don’t mind some extravagant drooling and often snoring. They socialize very well with other animals, preferably from an early age to avoid becoming aggressive toward other dogs. The Dogue de Bordeaux breed enjoys dog sports, exercise, obedience and agility.

The Dogue de Bordeaux breed is a relative of the Bullmastiff, Neapolitan Mastiff, and other similar breeds. It is thought to have existed in France for about 600 years or more. Since the Dogue de Bordeaux had originated in the Bordeaux region of France, that is where it gets its name. Other names for the breed include French Mastiff and Bordeaux dog. The breed initially guarded estates and hunted big game animals until the French Revolution when their association with the aristocracy cost many of them their lives. Afterward, the breed became farming dogs or butchers’ dogs. The Dogue de Bordeaux’s first appearance at a dog show was in Paris in 1863 (a breed standard was not written for it though until 1896).

The first Dogue de Bordeaux in the United States was imported in 1959, but wasn’t very popular until 30 years later thanks to its role in the movie “Turner and Hooch”. The breed was admitted to American Kennel Club registration in 2008. Over the Dogue de Bordeaux’s existence, it has served as a war dog, cattle herder, guard dog, hunter of boars, and trained to bait bulls, bears, and jaguars.

Check out the Dogue De Bordeaux puppies for sale we currently have in our stores. If there are none here, please contact us and we’ll be in touch.