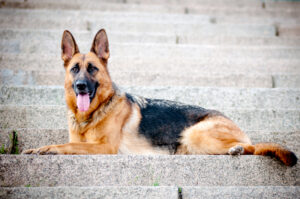 The German Shepherd Dog (GSD for short), also called Alsatian, Deutscher Schaferhund, or simply German Shepherd, is one of America’s most popular dog breeds, known for its intelligence and hard work. Its devotion and courage are unmatched and it is an amazingly versatile breed that excels at most anything it’s trained to do.

The breed is well proportioned and strong with a sturdy, muscular, slightly elongated body that has a light but solid bone structure. The head should be in proportion to its body and have a little bit of a rounded forehead. The nose is most often black, but blue or liver colors still do sometimes occur. The teeth should meet in a scissors bite. Its eyes are dark and almond-shaped but never protruding. The ears are wide at its base, pointed, upright, and turned forward. However, it is natural for German Shepherd puppies under about six months to have ears that droop slightly. It also has a bushy tail that reaches below the hocks and hangs down when resting.

There are three varieties of the German Shepherd: double coat, plush coat, and longhaired coat. It has a double coat made-up of a thick undercoat and dense, slightly wavy or straight outer coat. Most German Shepherd dogs have tan and black or red and black hair, medium in length and tend to shed all year round. There are some other, more rare color variations such as solid black, solid white, liver and blue. The white coat version is recognized as a separate breed by some breed clubs and is called the American White Shepherd. A piebald color has also occurred and is now being called a Panda Shepherd.

Discover more about our German Shepherd puppies for sale below!

The German Shepherd is an intelligent and versatile breed. They’re great at guiding and assisting, working with the handicapped, police and military service, herding, search and rescue, drug detection, competitive obedience, and just being an overall faithful companion. The breed requires an active lifestyle and makes for an ideal companion, protector, and guard dog. Very devoted to its family and home and usually maintains a suspicious demeanor around strangers. German Shepherds can be dominating and assertive towards other dogs, though normally friendly with other pets in the home. Therefore, it is important to begin training your dog beginning as a puppy in order to avoid negative behaviors later.

This breed is very active and athletic. It requires a lot of physical and mental exercise. Without the proper amount of exercise, it can become frustrated and develop negative behaviors. Participating in canine activities such as agility, herding, tracking, and diving is great exercise and fun for the dog.

Puppy socialization and training are critical, as well as continuing obedience training to ensure the puppy will become a well-mannered adult. The German Shepherd is a highly intelligent companion and extraordinary worker. Use consistent and positive reward-based training for best results. Your dog will also be happiest when he lives with his family and is raised in the household and exposed to the family’s activities.

The German Shepherd sheds regularly and is a heavy seasonal shedder. As a result, it is best to brush them daily. You only need to bathe them when necessary, however, as over bathing can cause skin irritation from removal of oil on their skin. Check their ears and trim their claws regularly.

The German Shepherd Dog originated in Karlsruhe, Germany from longhaired, shorthaired, and wire-haired local herding and farm dogs in the mid-1800s. German cavalry officer Captain Max von Stephanitz wanted to develop the ideal herding dog, so he and fellow breeders crossed various strains from Wurtemberg, Thurginia, and Bavaria; resulting in the ancestors of today’s German Shepherd. Today the breed’s versatility is employed in the performance of so many tasks that it is easy to forget the breed was originally developed to herd sheep. Its now famous qualities of intelligence, agility, speed, stealth, and courage were developed not in a police or military academy but in the sheep pastures of 1800s Germany.

The breed gained popularity in the United States during the early 1900s due to the canine movie stars Rin-Tin-Tin and Strongheart. Unfortunately, because it is among the German breeds (including the Dachshund) it suffered a decline in popularity due to anti-German sentiment during and after both world wars. However, due to the rise of modern livestock management and the decline of herding as a dog occupation, von Stephanitz promoted his breed as an ideal K-9 worker and today is therefore the preferred breed for police and military units all over the world.

(Based on breed recognition. See store for details on this particular puppy.)

Check out the German Shepherd puppies for sale we currently have in our stores. If there are none here, please contact us and we’ll be in touch. Our knowlegable staff looks forward to helping you find the perfect puppy for you and your family. 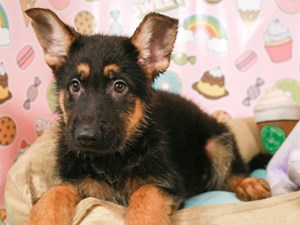 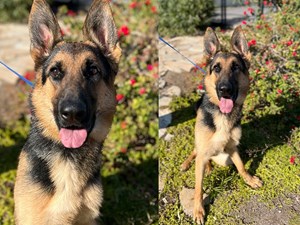