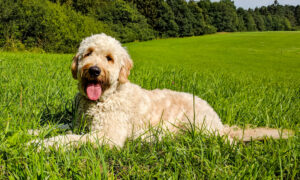 The Labradoodle, sometimes called an American Labradoodle, Labradorpoo, Labrapoo, Labrapoodle, or Standard Labradoodle, is a cross between the Labrador Retriever and Standard Poodle breeds. They are intelligent and friendly. The physical characteristics of this hybrid will vary depending on the genes inherited from its parents. They can have different coat types including: wiry, wooly, wavy, curly, or fleece with colors ranging from red, black, cream, chocolate, gold, and brindle. Although there is no completely hypoallergenic breed, the Labradoodle may be a good fit for people with allergies. Discover more about our Labradoodle puppies for sale below!

A Labradoodle’s temperament depends on the temperaments of its parents, inherited genes, and the amount of socialization it receives, but in general Labradoodles are friendly and devoted to their families, easygoing, and playful. Overall, they make excellent  companions. Due to their easygoing nature they usually do well with other pets and are generally good with children. A Labradoodle is also smart and easy to train due to the Poodle parent’s intelligence and the Labrador parent’s love of people.

The Labradoodle’s activity level will range from moderate to high. As a result, they require exercise every day and can be prone to restlessness or loneliness if left along for too long. Their activity level and larger size means they are a good fit for a house with a yard. They are great walking companions and actually love the water and can be exceptional, natural swimmers. Due to their Poodle genetics, incorporate educational games to stimulate their intelligence as well as their bodies.

Training a Labradoodle is easier than many other breeds, because they are eager to please and intelligent which makes them attentive while learning. They respond best to positive reinforcement due to their friendliness and intuition. Praise for good behavior in the form of treats and affirmation will work best when training. As with every other breed, train and socialize your Labradoodle when it is a puppy and exercise it regularly in order to avoid negative behaviors.

As a result of the Labradoodle’s hybrid nature, their coat is inconsistent and grooming will depend on the type of coat it has. Generally though, brush them about twice a week to keep their coats clean and mitigate shedding. However, it should only need to be bathed as needed. They also tend to be less prone to odor than other breeds. For optimal health, brush their teeth about three times per week to avoid bacteria and tartar buildup. It is also good to trim their nails about twice per month.

The name Labradoodle was first used in the 1955 book “Into the Water Barrier” by Sir Donald Campbell to describe his Labrador and Poodle cross. However, the Labradoodle did not truly come to be known until 1988 when Australian breeder Wally Conron crossed the Labrador Retriever and Standard Poodle. His goal was to combine the low-shedding coat of the Poodle with the gentleness and trainability of the Labrador Retriever to create a hypoallergenic guide dog. The cross breeding was a success and resulted in a dog that had a disposition appropriate for guide dog work with a low-shedding coat.

Check out the Labradoodle puppies for sale we currently have in our stores. If there are none here, please contact us and we’ll be in touch. 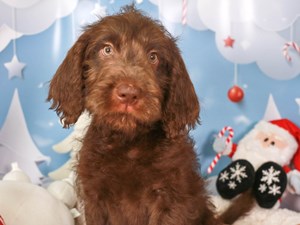 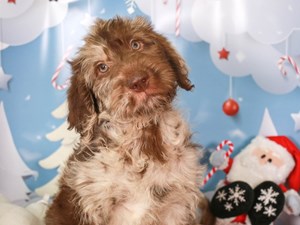 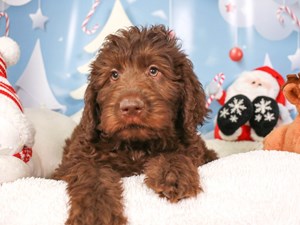