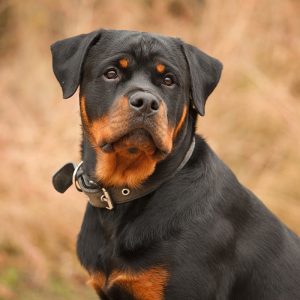 The Rottweiler, sometimes called Rottie for short, has a muscular, powerful body. Its head is broad with a rounded forehead and well-developed muzzle. Their teeth meet in a scissor bite. The Rottweiler’s ears are triangular shaped, and the tail is usually docked. The Rottweiler’s coat is short, thick, and has black with rust colored markings on its cheeks, muzzle, paws, and legs. Discover more about our Rottweiler puppies for sale below!

The Rottweiler is powerful, calm, courageous, loyal, intelligent, and a natural guard dog with a reliable temperament. These traits have made it great as a police, military, and customs working dog over the centuries. It can also be trained for competitive obedience. Due to the size and temperament of this breed, training and socialization should begin when it is still a puppy to help prevent unwanted or negative behaviors later on. It will need an owner that is calm, confident, and displays leadership. Rottweilers should live in the home with their owners. They can become bored, destructive, and aggressive if left alone in a backyard all the time.

This breed requires firm, consistent leadership but not harsh discipline. As a result, a sharp word is often sufficient reprimand if you have established your leadership. Heredity, training, and socialization will affect a dog’s temperament. Rottweiler puppies with good temperaments are curious and playful, willing to approach people and be held by them. Exposure to many different people, sights, sounds, and experiences when they’re young is a good way to sharpen their socialization skills and ensure they grow up to be a well-rounded dog.

Despite being a large breed, Rottweilers are relatively inactive indoors and a yard should suffice. Sufficiently exercise your Rottweiler and it can also live in an apartment. They thrive on work and need daily walks/jogs. Running around in the woods or open country will make them happy. Swimming, running beside you, or ball retrieving are great activities for this breed.

The Rottweiler has a smooth, short coat that is very easy to groom, and is an average shedder. Simply brush their coat with a firm bristle brush and bathe when necessary.

The Rottweiler breed is thought to have descended from the Italian Mastiff, which came with the herds the Roman army brought with them when they invaded Europe, and was bred in the German town of Rottweiler in Wurttemberg. In the Middle Ages the Rottweiler used as a herder, guard, messenger, and drafting dog.

However, it almost became extinct up until the 1800s when the breed began a comeback due to the efforts of breeders in Stuttgart. In the early 1900s the International Rottweiler Club was formed and the Rottweiler breed standard was set. The breed was first recognized by the American Kennel Club in 1931.

Check out the Rottweiler puppies for sale we currently have in our stores. If there are none here, please contact us and we’ll be in touch. 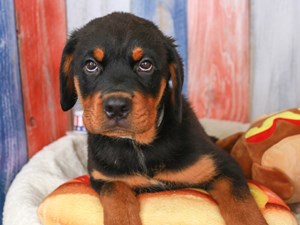