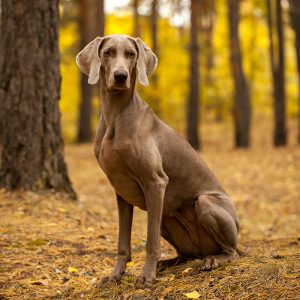 The Weimaraner is a moderately large, athletic, working, and hunting breed. They have a short, smooth coat that comes in shades of gray to silver-gray. Sometimes there is also a small white marking on the chest. Although rarer, the Weimaraner also comes in a longhaired version.

Often referred to as the “grey ghost” because of the distinctive color of its short, sleek coat, the Weimaraner is a graceful dog with aristocratic features. Bred for speed, good scenting ability, courage, and intelligence, it remains an excellent game hunter and active participant in other dog sports. Discover more about our Weimaraner puppies for sale below!

Lauded for his ability to work with great speed, fearlessness, and endurance when on the hunt, the Weimaraner is also known for being an easily trainable, friendly and obedient member of the family. This is a breed that loves children and enjoys being part of his family’s “pack.” Brave, protective, and loyal, the Weimaraner also makes a good guard/watchdog. The Weimaraner is a hunting dog, and as a result, has a strong prey drive. They should not be trusted with non-canine animals such as hamsters, rabbits, and guinea pigs.

This breed is intelligent and therefore learns quickly. However, it can get bored if the training is the same thing repeatedly, and just like other breeds, the Weimaraner should begin training as a puppy in order to prevent negative, destructive, and willful behaviors as they grow older.

Although it is relatively inactive indoors, without the proper amount of exercise it can become rowdy and difficult to control. A large yard and plenty of exercise is best for this breed. Give your Weimaraner plenty of exercise, or it will become restless and over-excited. The Weimaraner has stamina and has a good sense of smell, and being an intelligent worker, can be used for all kinds of hunting and sporting tasks.

Due to the Weimaraner’s smooth, shorthaired coat it is easy to maintain. It is also an average shedder. Simply brush it and bathe only when necessary.

Originally known as the Weimer Pointer (derived from the court that sponsored the breed), the Weimaraner is a product of selective German breeding and comes from the same general stock as other German hunting breeds. It is believed to be a descendant of the Bloodhound and was originally used to hunt wolves, deer and bear. Over the years because of the rarity of bigger game in his surroundings, the Weimaraner adapted to become a bird dog and personal hunting companion. Some of its many talents include hunting, tracking, retrieving, pointing, watchdog, guarding, police work, service dog, search and rescue, and agility.

Check out the Weimaraner puppies for sale we currently have in our stores. If there are none here, please contact us and we’ll be in touch.