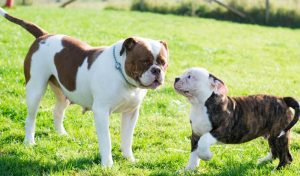 The American Bulldog is a muscular, sturdy and powerful breed. It is agile on its feet and its chest is wide and somewhat deep. The neck is muscular and tapers from the shoulders to the head. The muzzle and head are square, large and broad with muscular cheeks. There is a defined furrow between their rounded eyes, with a distinct, sharply defined, deep stop. The compact frame of the American Bulldog remains higher on the leg, more agile and swifter than its English counterpart. Some individual dogs are reportedly able to leap six or more feet into the air. Discover more about our American Bulldog puppies for sale below.

American Bulldog puppies should have a reverse scissors bite, but a moderate underbite, scissors, or even bite are acceptable. A variety of ear types are acceptable including cropped, rose, half-pricked and forward flap. Their eyes are most often brown but can come in any color. They sometimes have split eyes, where one eye is brown and the other eye is blue. The nose is black, red, brown or grizzle. The lips should be full but not too loose. The front legs are heavy-boned, strong and straight. The hindquarters should be very broad and thick with well-defined muscles. The tail is low-set, begins thick at the base, and tapers to a point.

Males are characteristically stockier and heavier boned than the more refined females. The head is large with strong jaws. Agile and light on his feet, the chest is wide and moderately deep, giving the sense of athletic ability and power.

The American Bulldog’s coat is smooth and short and comes in all shades of brindle including red brindle, varying degrees of white, red, brown, tan, fawn and piebald.

The American Bulldog is loyal, reliable, brave and determined. Not a hostile dog. Alert and self-confident, this breed genuinely loves children. It is known for its acts of heroism toward its master. It has strong protective instincts and needs a firm, confident, consistent pack leader. Well-socialize and obedience train them at an early age, to prevent them from becoming reserved with strangers.

Without that strong-minded pack leader who can tell the dog what is expected of it, it may be aggressive with other dogs. They need to be around people and know their place in their pack to be truly happy. This breed tends to drool and slobber. Without enough daily mental and physical exercise they will become high strung and may become hard to handle.

American Bulldog puppies will do okay in an apartment if sufficiently exercised. They are relatively inactive indoors and will do best with at least an average-sized yard.

The short, harsh coat is easy to groom. Comb and brush with a firm bristle brush, and bathe only when necessary. This breed is an average shedder.

The original American Bulldogs were not only used in the sport of bull-baiting but also by small farmers and ranchers who used them as all-around working dogs for many tasks including as guards and for hunting bear, wild boar, raccoon, and squirrel. The American version of the Bulldog has longer legs, is faster and has better agility than the English show dog.

The dog’s stamina, protectiveness, intelligence, and working abilities make him a prized worker for farmers since they can be trained to drive cattle and guard stock from predators. Some of the American Bulldog’s talents are hunting, watchdog, tracking, weight pulling and guarding.

Thanks to the efforts of John D. Johnson of Summerville, Georgia, the American Bulldog exists today. After Johnson returned from WWII he was disappointed to find that, like the English Mastiff, it was almost completely extinct. He decided to gather the best specimens he could find from all across the rural South in an effort to bring the American Bulldog back from the brink of extinction. Johnson has been breeding these dogs longer than anyone else in the world, and his father bred them before him. He is the sole reason they exist today. If it were not for his efforts they would be extinct.

Check out the American Bulldog puppies for sale we currently have in our stores. If there are none here, please contact us and we’ll be in touch. 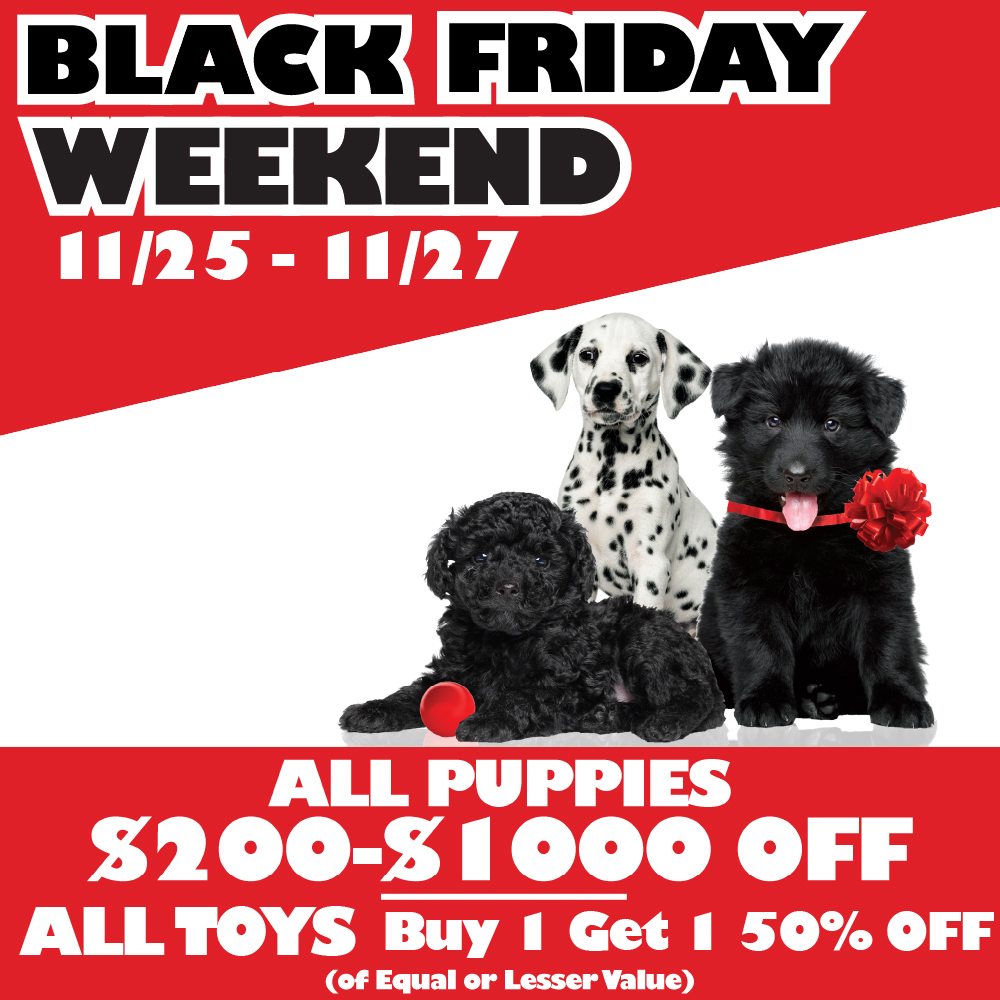