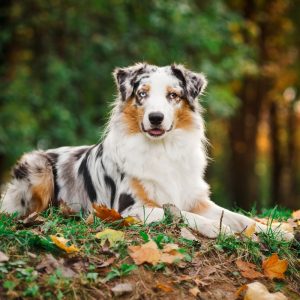 Their eyes are oval in shape and medium in size and come in a variety of colors including brown, blue, amber, or any combination including flecks and marbling. The Australian Shepherd’s coat is a medium texture, straight to slightly wavy, and has a moderate length with an undercoat that varies with climate. The coat colors include black, blue and red merle, red with or without white markings, or tan.

Australian Shepherds have a high energy level and playfulness. As a result, they are easy-going and still act puppy-like in their adult years. They are also courageous and therefore make a good watchdog. The Australian Shepherd is excellent with children because they love to play. In addition, they are naturally protective, affectionate, lively, agile, attentive, highly intelligent, and eager to please; therefore making them easy to train. However, they are not the type to lie around the living room all day, live happily in the backyard, or go on just a fifteen-minute walk. They need a lot of exercise and something to occupy their mind daily. Otherwise they will become bored, which leads to behavior problems. They would be an excellent choice for intermediate dog owner who can keep up with their energy levels.

The Australian Shepherd’s coat is easy to groom, doesn’t need too much attention, and is an average shedder. Therefore, weekly brushing sessions will keep the Australian Shepherd’s waterproof, double-layer coat looking its best. More work is required during shedding season, though. During this time, use an undercoat rake every two or three days to remove excess dead hair, followed by a cleanup with the wire brush. Since Aussies often work or play outdoors it’s not uncommon for them to get dirtier than when they left, but unless they are particularly dirty, they only need a bath occasionally. As with all dog breeds, the Aussie’s nails should be trimmed regularly.

Despite its name, the Australian Shepherd breed is actually not from Australia but was most likely from the Pyrenees Mountains between Spain and France, and then refined in the U.S. to work as a herding dog on ranches. The breed’s primary ancestors were most likely Spanish dogs accompanying the Basque shepherds and herds of Merino sheep, which were then exported to both America and Australia. It is believed that at some point it probably crossed with the Collie breed. With a lineage such as this, the Australian Shepherd has had many names in the past including: Pastor Dog, Blue Heeler, Spanish Shepherd, Bob-Tail, New Mexican Shepherd, and California Shepherd. As mentioned previously, its many talents include retrieving, herding, watchdog, guarding, police work, narcotics detection, search and rescue, agility, competitive obedience, and performing tricks.

Check out the Australian Shepherd puppies for sale we currently have in our stores. If there are none here, please contact us and we’ll be in touch.