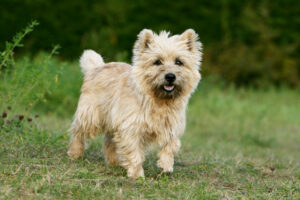 The Cairn Terrier is known as one of the ancient working dogs. You might recall in the classic film The Wizard of Oz; Toto was a Cairn Terrier. They are low-shedding dogs whose faces have a fox-like appearance. Their head is large compared to their body. The coat can be black, black and brown, wheaten, red, sandy, grey or brindle. The Cairn Terrier is a very alert dog breed, a bit bossy and curious too. They are usually very gentle and make a great family pet, but they can be stubborn, so obedience training is essential. Keep in mind, the Cairn Terrier was bred to hunt so they have a natural instinct to dig and chase little pets. Discover more about the Cairn Terrier puppies for sale below!

The Cairn Terrier is playful and loves their home but can become withdrawn and unhappy if you do not give them adequate time and attention by their owners. They can be aggressive, so early training is the key to owning a good, socialized Cairn Terrier. The breed is energetic and usually barks at even small things. They are always on the lookout so they make good watchdogs who will alert you to the existence of strangers.

Because of its small size, the Cairn Terrier can be a good dog for apartment dwellers, but is also hardy enough to enjoy agricultural life. However, they must have sufficient exercise/activity. A daily walk or vigorous play for half an hour will help keep your Cairn healthy and alert. Despite the fact the Cairn is a quick study, it can also have a stubborn streak. Regular obedience training beginning as a puppy is essential to teach good manners and respect for your authority, but be positive and consistent. Because of their barking tendency, a “quiet” command should be one of your basic commands. It is also a good idea to supervise free time in the yard, as they will dig.

The Cairn Terrier originated on the Isle of Skye more than 200 years ago where they kept farms free of rats and hunted foxes, otters, and badgers. The breed takes its name from the piles of stones that mark ancient Scottish burial and memorial sites called cairn. These stone piles were often hideouts for the vermin hunted by the terriers.

All terrier breeds in Scotland were originally classified as Scotch Terriers, but in 1873 a new system was implemented and Scotch Terriers were separated into two classes: Dandie Dinmont Terriers and Skye Terriers. Cairn Terriers, Scottish Terriers, and West Highland White Terriers were included in the the Skye Terrier classification. Those breeds were distinguished only by color because all three could come from the same litter. During the late 19th century, Scottish Terrier breeders started to select for different characteristics. The West Highland White Terrier became a separate breed in 1908 and the Cairn Terrier in 1912. The first Cairn Terriers were imported to the United States in 1913. In both the U.S. and in England, the Cairn and West Highland White were interbred until 1917 when the American Kennel Club barred registration to any dog from such interbreeding.

Check out the Cairn Terrier puppies for sale we currently have in our stores. If there are none here, please contact us and we’ll be in touch. Our knowledgeable staff can answer any questions. 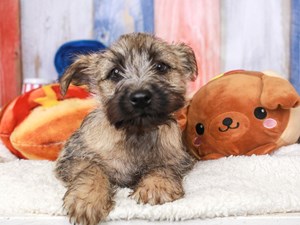 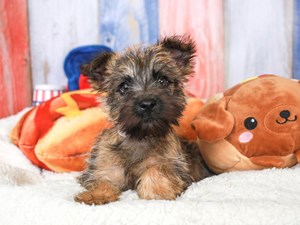