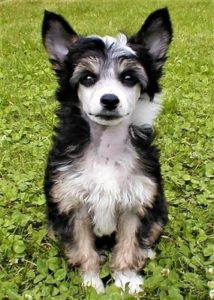 The Chinese Crested breed has an exotic appearance and interesting history in that it was bred to be an invalid’s companion, so its devotion is unprecedented and is keen on its owner’s intention. As a result, this is not a breed that can withstand being left alone for long periods of time.  This breed actually does not need to go out and play as most dogs do, instead, it’ll do just fine lounging around the house. Surprisingly, they are athletic enough to jump tall fences and compete in agility contests. The Chinese Crested comes in two variants: the Hairless, with silky hair on the head (crest), tail (plume) and feet (socks); and the Powderpuff, which has a full coat. Interestingly, both variants can come from the same litter. Discover more about our Chinese Crested puppies for sale below!

An incredibly functional dog for Arizona since the hairless Chinese Crested is incredibly tolerant of heat, it can easily and happily withstand 100-degree temperatures with little problem, unlike most other breeds. This does not mean the dog can be locked in a car in the heat, it just means the dog can go outside for longer periods of time without jeopardizing its health and safety.

On the flip side, the dogs cannot tolerate cold temperatures; in fact, some people try to ‘harden’ their Chinese Cresteds by exposing them to cold. Not only does this not work, but it’s also cruel. The cold will kill this dog a lot faster than heat. Contrary to popular opinion, the hairless dog does not require sunblock, moisturizing lotion or any other substance applied to the skin; in fact, that often causes problems, but the dogs do need to be bathed regularly – every one or two weeks.

This is a very needy breed of dog, highly sensitive and reactive so it tends to be wonderful with familiar faces but does not like strangers.

Check out the Chinese Crested puppies we currently have in our stores. If there are none here, please contact us and we’ll be in touch.