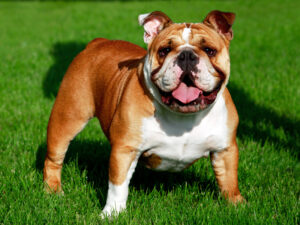 The Bulldog is a small-statured, medium-sized dog, originally bred for working with bulls but trained and bred to fight bulls for sport. This practice began in England in the 1200s and throughout Europe until the mid-1800s. The Bulldog’s low-to-the-ground, heavy and thick-set body, along with its broad shoulders, provides a low center of gravity. This allows the Bulldog to crawl close to the ground, originally useful for staying out of range of a bull’s horns. The large circumference of the head is equal to the dog’s height at the shoulder, offering sufficient space for strong, developed muscles in the dog’s wide jaw. Its distinctive undershot bite allowed it to hang on to the bull with amazing strength. Discover more about our English Bulldog puppies for sale below!

The shuffling gait is a result of this selection since the dog needed to be able to withstand severe shaking and thumping without having its spine or ribs broken.

Bulldogs can move swiftly and make sudden leaps, which accounts for their surprising agility and cleverness.

The coat is glossy and fine, with standard colors including, red, white, yellow or a combination of those. Young bulldogs are full of energy, but they slow down as they age.

Although the English Bulldog’s appearance can be intimidating, it is one of the gentlest dog breeds. Their appearance makes them great watchdogs, but their personalities make them huge lovers. A Bulldog that understands its place in the human pack with thrive with all people including kids.  The English Bulldog is described as very affectionate, dependable, gentle with children but known for its courage and bravery. This breed is good with family pets, but some English Bulldogs can be combative with strange dogs especially if their owners are not present to lead them. Bulldogs are very people-oriented and will seek as much love and attention as they can get; in fact, these dogs require a lot of affection from their owners if they are to thrive and be happy.

This breed snores very loudly so buyer beware. This is a trait that these dogs are famous for and it is just a fact of life for them. Most English Bulldog puppies also drool and slobber so they are messy eaters, but most owners find these qualities endearing in their bulldogs.  They are also prone to flatulence, especially when fed food other than their regular dog food diet. A once ferocious and tough dog – through select and skilled breeding – the bulldog has become a docile and loving pet and cherished member of countless families.

The bulldog is beloved for its patience and affection for children making it an excellent family pet known for being jovial, charming and at times comical though messy. The breed is devoted, obedient and always willing to please, yet preserves its own independent brand of stubbornness present in the bulldog breed. Most of them are pleasant or even aloof towards strangers; however, some can be hostile to unfamiliar dogs, though the breed is compatible with most household pets.

Bulldogs that display guarding behaviors such as guarding furniture, food, toys, other items in the house, or that are dog aggressive, do not have owners who are being the dog’s pack leader. This behavior happens when dogs are given the freedom to take over and can be corrected when/if the owners start acting with proper leadership. The fact is dogs are much happier when they know they follow their human. If a dog feels they need to run the home, they’ll be less happy, as this is not a responsibility a dog wants to have. English Bulldogs can be a bit dominating so their owners are best to show strong leadership and understand alpha canine behavior.

Potential English Bulldog owners should know this breed is prone to having health issues, so expect to see vet bills over the course of the dog’s life. Common health issues include:

This is not a dog to drive around within your car, especially in the Arizona summer months. The breed is prone to mast cell tumors, skin infections, and hip and knee problems.

Bulldog breeders often deliver their puppies by caesarean section because of the puppies’ large shoulder girth.

(Based on breed recognition. See store for details on a specific puppy.)

Check out the English Bulldog puppies we currently have in our stores. If there are none here, please contact us and we’ll be in touch. 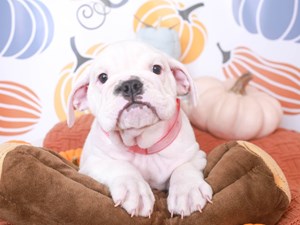 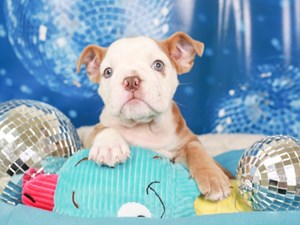