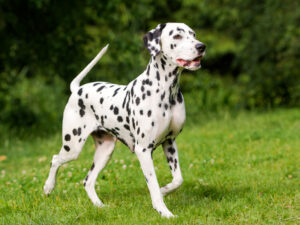 The Dalmatian is a well-known dog breed, famous for its white coat with black and/or brown spots, though they can also be lemon, dark blue, tricolored, brindled, solid white or sable. Dalmatian puppies are born without spots, but they develop weeks later. The Dalmatian is a large, strong and muscular dog whose teeth meet in a scissors bite and whose ears are set high, hanging down and gradually taper to a rounded tip. Best known as the star of Disney’s 101 Dalmatians, this sleek and athletic breed has a history that goes back several hundred years. Historically used as a carriage dog, but has also served in many other capacities, including hunter and firehouse dog. Discover more about our Dalmatian puppies for sale below!

Dalmatians are very energetic, playful, happy, and dedicated. They do not like to sit around all day or have nothing to do and may be too lively and active for very young children. Within their preferred circle of humans, they are smart, loyal and loving dogs. They are good around other pets but can be reserved and/or aloof towards people they don’t know. The Dalmatian also needs plenty of leadership and human companionship to be happy. They will not do well if left out in the yard all day and as a result have been known to dig large holes when that happens.

Young Dalmatians are very energetic and need a tremendous amount of leadership and exercise. Without firm, consistent training they may develop unwanted, negative behavior problems such as aggression, furniture destruction, and anxiety. They are quite intelligent, but can produce multiple negative behaviors if they sense their owners are meek, passive, and/or if the owner is not properly communicating with the dog. Dalmatians are trainable to a high degree of obedience, and due to their stamina and intelligence can be trained for defense and are good watchdogs.

As an eager and playful companion, they should be exercised in a secure area because the Dalmatian is known to roam and is capable of running for miles at a time before getting tired. The Dalmatian is most suitable for owners who can give it attention and time for exercise as they’re capable of great endurance and a fair amount of speed.

The origin of the Dalmatian breed is unknown. Spotted dogs have been seen throughout history in Africa, Europe, Asia, and traces of spotted dogs are found in Egyptian bas-reliefs and Hellenic friezes. Similar to the Dalmatian, a breed in the 1700s known as the Bengal pointer existed in England, but the Dalmatian obtained its name during its stay in Dalmatia, a province on the eastern shore of the Adriatic Sea now known as Croatia.

In England during the 1800s the breed became popular as a carriage dog where it was used to clear a path before the horses. It would also guard the horses and coach when they were at rest. As a result, to this day the Dalmatian retains a natural affinity for horses. This affinity took the Dalmatian to a career path in the United States. Here they became firehouse dogs. They would run with the horses to the fire, watch over equipment during, and sometimes rescue people from burning buildings. They would then accompany the fire wagons back to the station and resume their duty as watchdogs. Today most Dalmatians are companions and family members, but many fire stations across the country still have Dalmatians as mascots. With a history like this, the Dalmatian is very hardy and has great stamina.

They have been used for a wide variety of jobs during their long history, never specializing in one area. The versatile Dalmatian has been a mascot for firemen, war sentinel, draft dog, circus performer, vermin hunter, fire wagon follower, bird dog, trail hound, retriever, shepherd, and guard/watch dog.

Check out the Dalmatian puppies for sale we currently have in our stores. If there are none here, please contact us and we’ll be in touch.