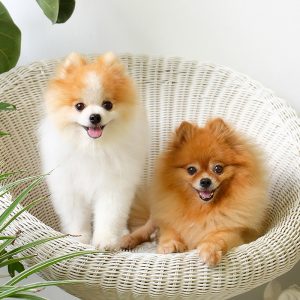 The Pomeranian is a small, very lively, and extroverted breed that enjoys being social and relishes attention. This breed looks a little bit like a fox with its high set, erect ears and distinctive puffy coat that comes from its thick, soft undercoat and long outer coat. Pomeranian coats come in colors ranging from black, blue, tan, brown, cream, orange, sable, red, silver, gold, grey, brindle, merle, fawn, and white. Discover more about our Pomeranian puppies for sale below.

The Pomeranian is a very inquisitive and alert dog that might tend to bark a fair bit and can be shy around strangers. It is also intelligent, loyal, bold, and tends to always be in a good mood. Pomeranians do have a sassy, independent side: they are self-confident (sometimes too confident) so training from a young age is important so the puppy doesn’t become demanding. Small dog syndrome can be a problem with this breed, where owners over-spoil them and they grow to think they are the pack leader. This is a human-caused condition, not natural to dogs, that will be avoided with training and obedience from a young age.

The breed is intelligent and eager to please but has a short attention span so use positive techniques while training and keep sessions short and interesting — they enjoy learning and performing new tricks, and this is good for their mental stimulation. Some of the Pomeranian’s talents include watchdog, agility, and performing tricks.

Due to the breed’s small size, it can live in an apartment just fine. It is active indoors but will do okay without a yard. However, as with most dogs, it should be taken on daily walks. Be careful to ensure they don’t overheat in hot weather though.

The Pomeranian breed originated in the region of Pomerania (today the area of Germany and Poland), and was bred from the ancient Spitz breeds. The original Pomeranians were larger (weighing up to 30 pounds) and worked as sheep herders.

From Marie Antoinette to Martin Luther, from Sir Isaac Newton to Michelangelo it has won the hearts of many people throughout time. Queen Victoria began breeding the Pomeranian down in size and showing them in 1888, making them popular in England. It was then the breed was first recognized by the AKC, and over time, made its way to the United States and other parts of the world.

It’s known that mixed breeds tend to be healthier than full breed dogs. This makes the Pomeranian have a lesser chance of developing serious health conditions but one, in particular, is more common in this breed.

Pomeranians are a popular breed that suffers from dental disease which may be the reason they are prone to it. It’s important to brush your Pom’s teeth on a regular basis. They also should receive a dental check-up by a veterinarian every six months instead of every year like most popular dog breeds. This ensures their teeth stay healthy.

Dental disease isn’t just a Pomeranian issue. Dental disease can occur in any breed. It can happen early as well. Most dogs suffer from dental disease by the age of the three. Proper dental hygiene doesn’t seem to cross many pet parents’ minds. But, it should.

(Based on breed recognition. See store for details on this particular puppy.)

Check out the Pomeranian puppies for sale we currently have in our stores. If there are none here, please contact us and we’ll be in touch. 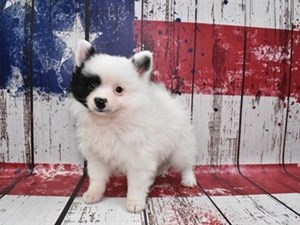